The Mercury provides news and fun every single day—but your help is essential. If you believe Portland benefits from smart, local journalism and arts coverage, please consider making a small monthly contribution, because without you, there is no us. Thanks for your support! 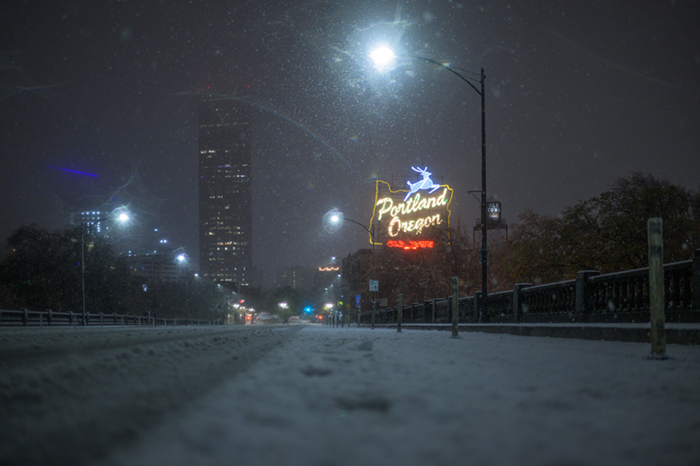 GOOD AFTERNOON, PORTLAND! Look, that freak (but admittedly PRETTY) snowstorm last night was truly a harbinger for climate change—so if all you kids could please stop celebrating getting out of school today, that would be great. Instead, perhaps you’d like to forgo TikTok for 20 seconds and read some NEWS??

• Here’s a story that got buried over the weekend, but should not be missed: A bunch of local big business folk and power brokers are reportedly spending a LOT of money (up to $700,000) to torpedo the campaign of Portland’s first Black woman elected to city council, Jo Ann Hardesty, and get her replaced with a more business-and-cop-friendly candidate, Vadim Mozyrsky. (Gee, I wonder who could be behind such a dark money effort? Annnnnnnd… cue the segue!)

News: Portland biz and labor groups plan to spend up to $700K in the coming weeks to help Vadim Mozyrsky best Commissioner Jo Ann Hardesty and her other challenger & boost Dan Ryan in his reelection campaign.

• In a very much related story, the ballot measure written by local anti-tourism/anti-houseless persons group People for Portland was SHUT DOWN by the Metro Regional Government’s legal team, due to the clearly unconstitutional language that tried to subvert the will of the people. (You can expect P4P to respond in the same manner as most babies—crying because they didn’t get their way.) Our Alex Zielinski has more on the debacle.

• A federal judge is allowing Oregon prisoners to file a class-action lawsuit against state leaders for the fucking ABYSMAL treatment and slow action they endured during the pandemic, in which 45 inmates died and more than 5,000 caught the COVID virus due to lax protocols.

A Portland Public Schools teacher is alleging the district placed him on leave in retaliation for speaking out against the district’s plans to relocate Harriet Tubman Middle School. https://t.co/DAbfCmX8zG

• After more than 50 years with the Portland Trail Blazers—and coining the term “Rip City”—beloved broadcaster Bill Schonely is retiring, and he was (rightly!) honored at last night’s game against the Utah Jazz. Bon voyage, sweet Bill!

• Russia is amassing thousands of troops and hundreds of tanks and other military vehicles (to be led by a cruel new general) as they move into the eastern region of Ukraine—a situation that could turn very, very bad for the people there as experts predict the outcome will be “brutal.” Meanwhile, the mayor of Mariupol says that more than 10,000 civilians have been killed in the city since the Russian’s siege started a month ago.

President Volodymyr Zelensky warned that “tens of thousands” of Russian troops were poised for a major assault in the east. Ukrainian officials urged civilians to escape while there was still time. https://t.co/CvB0HOfnBB
— The New York Times (@nytimes) April 11, 2022

• A sharp increase in COVID cases has inspired Philadelphia to reinstate their indoor mask mandate in an attempt to stop a new wave of infections.

NEW: Five universities are reinstating mask policies amid outbreaks on campus thought to be spurred by the emergence of another strain of the Omicron variant: https://t.co/NiH2AnZUqJ
— Giulia Heyward (@giuliaheyward) April 11, 2022

• President Biden announced that his Justice Department is finalizing plans to crack down on “ghost guns”—privately made firearms without serial numbers—to slow the escalating murder rate across the country (while also trying to get a toe-hold in gun reform legislation that is continually stymied by Republicans and gun nuts).

• Speaking of Republican gun nuts, a former Virginia police officer who fucked around and participated in the January 6 domestic terrorist attack on the Capitol has been found guilty of all six charges leveled against him. Ha-Ha-and-HA!

.@BritneySpears has said she is pregnant https://t.co/AdtWKBOmZB
— Pitchfork (@pitchfork) April 11, 2022

• AHOY THERE, STONERS! The SPLIFF Film Festival—featuring short, hilarious, trippy, and thoughtful mini-movies about cannabis and made by stoners just like YOU—is coming to Revolution Hall for one night only on Saturday, April 16! GET THOSE TICKETS NOW! (And speaking of the munchies, your favorite week of the year is almost here: It’s the Mercury‘s PIZZA WEEK featuring $3 specialty slices at 28 locations across the Portland area, starting Monday, April 18-24. Eat ’em up!)

• And finally, have a great evening… you know… like this guy!

Hope everyone has a great day like this guy pic.twitter.com/7lXu3MFaUT
— Wu-Tang Is For The Children (@WUTangKids) April 11, 2022

Tue Apr 19 , 2022
The EpiPen scandal has reworked Mylan Prescription drugs and its CEO Heather Bresch into the latest symbols of corporate greed. In the span of just a several months, they’ve gone from small-regarded gamers in the vast pharmaceutical marketplace to the targets of countrywide ridicule more than a relentless collection of […]